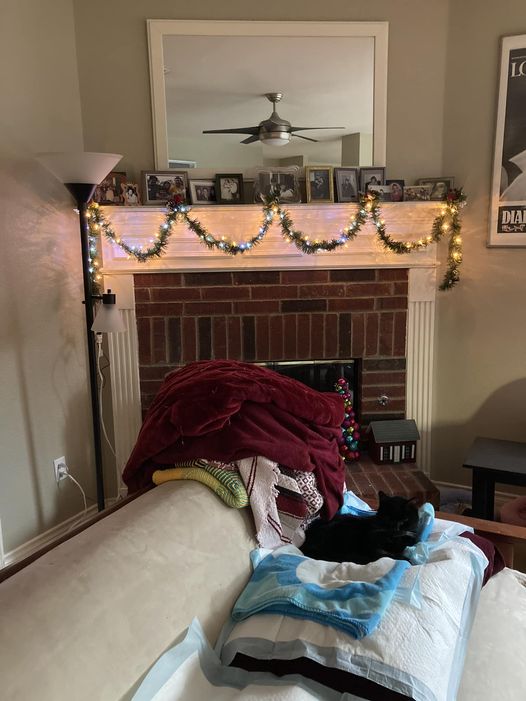 I would like to preface this by saying that I love J.J. to bits. He’s the cat of my heart, he’s been my bodyguard for over two decades, and I am so glad I had him in my life (the picture above features the mantel lights that we put up after taking down the Christmas lights because he can’t see very well anymore and it gives him a little more light at night. Also, all that bedding is so that I can switch it out after he pees on it).

That being said, he also turned 21 a month ago. He has kitty dementia, is moderately blind and deaf, and for the last six months has been increasingly incontinent in weird ways. He won’t go in the litter box, even if it’s just been cleaned or recharged with fresh litter. He’ll go up to it, then squat and pee within a foot of the box. He also pees in his bed at least a couple times a day, and poops in it or on the carpet.

And no, we haven’t changed the litter and yes, we’ve tried installing new litter boxes and all the other fixes that are supposed to stop this behavior. Doesn’t matter—he still won’t go in them. We’ve taken him to the vet. He’s fine. The vet basically said, “He’s gotten to the point where he’s gonna go where he wants to, and there’s really nothing you can do about it except clean up after him.”

So we’re spending a fortune on pee pads to put under the litter boxes and his bedding. Which is a pair of cushions covered with two pee pads and a towel or other fluffy fabric on the futon. This is his chosen spot—it’s right under an air vent so he stays warm in winter and cool in summer, he has vertical superiority and can see everything in the room, and we have a ramp set up so that he can get up easily to the futon. Which is fine, except that as of yesterday Jessie decided that she wanted to camp out on his bed so he moved to the other set of cushions on the futon. Now I have to check two sets of bedding for pee/poop and keep both covered with pee pads.

I also bathe him regularly with a damp washcloth to get pee out of his fur. And he yells at me (and I mean yells—no gentle meow) for fresh water/treats/petting every time I go into the kitchen. Which I give him, because I love him.

But between the fortune on pee pads, and the multiple loads of laundry I have to do every day to wash his peed-upon bedding, and picking up his turds, and cleaning the carpet/tile, and the yelling (especially if I dare to leave his sight and go upstairs to work), and the bathing, and the constant faint smell of pee downstairs, I’m getting a little tired. He’s still eating and drinking in addition to pooping and peeing, gets around fine, and shows no signs of distress, pain, or dehydration. He’s just very, very old for a cat.

I love him. I always have, and I always will. And I will miss him very much when he goes. But there will also be a certain sense of relief when he crosses the Rainbow Bridge. And if that makes me a bad cat momma, so be it.